The Bookshop of the Broken Hearted by Robert Hillman 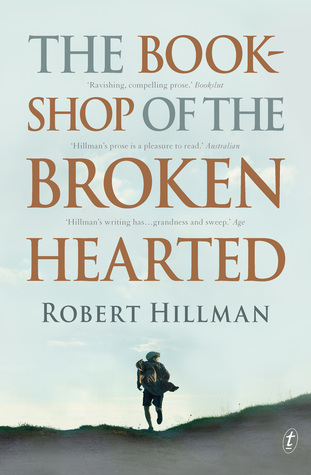 This story has much to admire, and Hillman’s writing is beautiful – spare and striking. There is a marvellous clarity about the emotions and situations in this novel.

One cannot help but like Tom. He has a heart, albeit broken, of pure gold. Athough Hannah is rather more complicated, and our engagement with her is threaded through with an uncomfortable and aching pity, we heartily wish her well. Yes, she does seem a bit odd to Australian eyes. That is perfect evidence of Hillman’s masterly rendering of an exotic female character.

The arc of this story is perfectly composed, and the ending realised with suitable tenderness. I found myself feeling most desperately for the boy Peter.

I won’t include spoilers because there is quite a tale – actually quite a few tales – clasped inside this book, with a couple of the weightier storylines bending the main narrative a little out of shape. Some of the character and place names have also been given a cipher-like simplicity, as though they are claiming the archetypal status of an everyman, which sometimes brought me out of the storyline.

These are mere minor quibbles. Overall, this is a wonderful book.