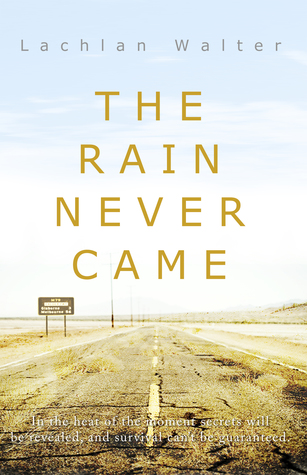 The Rain Never Came addresses several significant issues of the twenty-first century. Climate change is high on the list, but this story also considers the strained interactions between communities and the law. Another focus is the difficulty of communicating emotions and thoughts, especially between men. Opinions proliferate. Considered responses are held close and not shared.

Does this sound like a world you know? You are right! It’s Australian dystopia with bite.

In a bone-dry Australia of the future, not everyone wants to scamper to the safety of the north where the climate is more habitable.

Small rural communities hold out in the parched outback that covers most of the country. They  barely scrape a living.

The CRP (compulsory relocation police) try to round them up into camps to send them “up the line”. For their own good, of course.

Bill and his brother-in-law Tobe witness strange lights in the sky to the west, which they feel compelled to investigate. Is it thunder and lightning bringing longed-for rain? No? Maybe it’s a battle site between the CRP and another small town?

With Tobe’s two dogs struggling alongside, the pair discover devastation and a frightened, silent child who needs saving.

This is dystopia that kicks you in the head. The story strands us in the misery of the unknown, in the helplessness of a wrecked climate. Readers never learn what events led up to this point, or what happens elsewhere in the country (or the world). We’re not sure where the CRP send relocated people after the holding camps. We don’t know what political or official community infrastructure exists. We are deep in dystopia here. Just like Bill and Tobe, who are lost in the new world, navigating without guides apart from what their own judgement tells them.

Inevitably, secrets are revealed and relationships are fractured. Nothing can be taken for granted, nothing stays in its familiar place. This world doesn’t really allow for anything else.

Some of Bill’s inner commentary is poetic in its description of the country:

We slowed, stopped at the bridge, jumped out. Trees grew thickly around us, hugging both sides of the road. We must have been on an aquifer; they formed a solid wall, casting us in deep shadow. The pounding sun was far away, hidden by the canopy, robbed of its ferocity.
There was no birdsong. The world sighed as the wind blew.

By contrast, the spoken dialogue is sparse, colloquial and bloke-y. A minimalist vocabulary serves every situation and emotion. The contrast speaks effectively to the enormity of this post-climate-disaster world. The Australian vernacular is bleak.

To my mind, The Rain Never Came is the boy twin of Charlotte Woods’ The Natural Way of Things.  It is Australian dystopia from a masculine perspective, to contrast with the misogynist horrors of Woods’ work. It would be amazing to read those two books in sequence!  Readers of Cormac McCarthy’s The Road will also like this book.