The Sealwoman’s Gift by Sally Magnusson 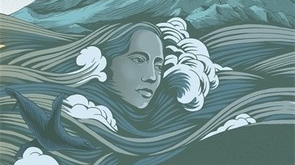 This story is based on what is (to non-Icelanders) a little-known piece of history: Turkish pirates raided Iceland in the 17th century to capture slaves – slaves for sale in the open markets.
Slavery was big business at the time. Many colonial powers were raiding Africa and any poorly-defended island or beach they could find to capture people for the slave market. Horrifying but true. Exploitation that was open and ‘fair game’ to the slave traders who thought nothing of capturing humans for sale. Slavery continues in many places and across many societies, and I wonder whether we are more civilised or less civilised than our predecessors just because we push it out of sight. But back to the book!

The evocation of Icelandic life is wonderful, and I was fully immersed in the characters (who are based on historical figures hinted at in old records) and their reactions to the raid. Asta, the preacher’s wife who is our main interest, is quite complex and not always as obedient and hard-working as she ‘could/should’ be, according to the standards of the village and the time. She is a bit of a dreamer, and that helps her survive the horrific events of the raid, the repulsive sea journey, birthing a child onboard, the slave market and her life in captivity (which is not as grim as it might have been).

There is a also a bit about the politics of Iceland and a fair bit about seafaring. I didn’t find the sea pirates very sympathetic although it is clear that we get many sides of the story. I didn’t quite feel Asta’s attraction to her captor, who had sold off her son and kept her young daughter in his harem, but the scenes of her inner struggles with her circumstances were intriguing.

A lot remains unresolved at the end of this story, but this is a great way into Icelandic history. Highly recommended.