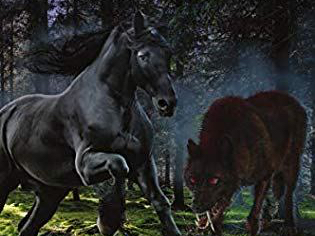 Equinora is an enchanted land where horse herds run free, tended by tribes of human settlers. Created by the powerful horse goddess Aureana, Equinora should be a peaceful and beautiful land. But something has gone very wrong.

Lonely in her solitary state, Aureana sought to create a mate, but instead created six unicorn guardians of the land, each gifted with specific powers. A final attempt at creating a partner led to complete disaster when Aureana made Shadow, a powerful black duocorn filled with hate for everything living. Banishing Shadow to the Obsidian Caves, Aureana returned to the Spirit World, leaving the unicorns in charge.

Several generations later, the unicorns have become self-absorbed and Shadow tests the barriers of his prison, sending forth his legions of vicious bloodwolves and scorcheels, whose only aim is to kill everything alive and poison the land.

Enter Fleet, an adolescent colt reared in seclusion from this dangerous world, and Yuma, a young man of the tribes sent to find a mate. When Fleet’s dam is killed in a bloodwolf attack, he is injured and poisoned, but he now has a mission and a goal: to alert the horse kings of the danger, and to find a home among the herds.

Combining the structure of a coming-of-age novel with an epic quest, The Bloodwolf War follows Fleet and Yuma through many perilous adventures. Fleet discovers his ancestry and the history of the unicorns, and takes on the mantle of leadership that is his birthright. Along the way, he learns about love, lust, magic, duty and courage.

This is an immersive adventure story with the added bonus of very realistic horse characters. The world of Equinora is comparatively unsophisticated, with no technology, and spears and bows the typical weapons. Fleet and Yuma are the first pairing of horse-and-man, although others later learn to bear humans and to ride. The unicorns’ magical homes are brilliant by contrast.

Equinora is also a very gendered world, where stallions rule the herds, often quite brutally, and men control the human communities. It is refreshing to see some of the characters resist this state of affairs, and it will be interesting to read about the progress of these rebels as the series continues.

In true adventure-story style, readers are left wondering whether the problems have been entirely resolved by the story’s end, making us eager for the next instalment.

It is very clear that Paula Boer knows horses. Adept at creating animal-based fantasy for young readers, Paula’s Brumbies series are Amazon best-sellers. I was fortunate enough to speak with Paula about her work earlier this year.

The Equinora Chronicles promises to be another excellent set of books, underpinned by Paula’s deep knowledge of animal behaviour and her magical imagination. With realistic animal characters in enchanting settings, Paula’s books make great gifts for young horse enthusiasts.