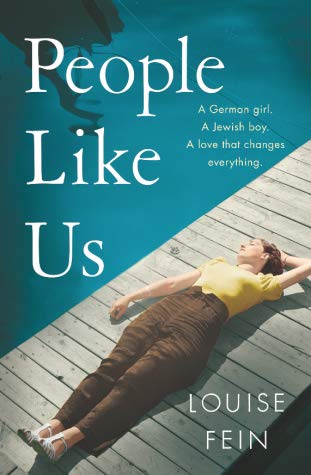 People Like Us is a heartbreak of a book, telling the story of Hetty Heinrich, daughter of an SS officer, through the 1930s as the Nazis come to power and flex their hate-filled muscles.
Hetty has a lasting crush, later developing into love, on Walter, her older brother’s childhood friend. Walter is kind, thoughtful, intelligent, and strong. He is tall, with blue eyes and blond hair. He is also Jewish, and as the Nazi-sanctioned anti-semitism systematically destroys the Jewish community throughout the nation, he becomes impoverished and reviled.

Hetty is a fascinating character, and one of the great strengths of this book is the way it takes us into the mind of young German children, brought up to revere Hitler through their formative years. It’s evident to us – because we know what happened – how sections of the population are being turned against one another with lies and promises, but in this book the author has made us see both the dogmatic certainty of those who want a better future, and the personal confusion of people who question how that future can arise from hatred and atrocities.
All the characters in this book are well-rounded and believable, and their vacillations between belief and doubt in authority show just how humans can be brought to believe falsehoods, to act out of fear and to shun the ‘other’. “Divide and conquer” is an ancient recipe for success, and this story looks at how arbitrary divisions on the basis of religion, ethnicity colour, etc, can promote harmony and conformity in one group while devastating another.
Author Louise Fein saysshe can see similarities between our times and 1930s Germany, and I don’t think there’s any dispute about that. I particularly like that the story doesn’t take any shortcuts or gloss over the ugliness of the period. These things did happen, and the story explores how that could be, without magically making Hetty more aware of wrong and right than other people. She’s an ordinary girl, and although she develops doubts about the Hitler cult, her best convictions come from her personal emotions. There’s such a ring of truth in that. Logic and ethics won’t win the argument about right and wrong – personal connections have a chance to do so.
For one moment putting aside the important themes of the book, I also want to say that it’s a cracking, un-put-down-able story that will resonate with readers from 15 up. The end is a masterpiece of restraint and tenderness, with nothing squibbed.
I will be recommending this book to so many people: lovers of general historical fiction, and people that I know liked The Book Thief, The Guernsey Literary and Potato Peel Society, The Tattooist of Auschwitz, The House By the Lake: a story of Germany, and particularly All the Light We Cannot See  because of the classy writing and the width of the vision.
This is a stand-out read of 2020. Pre-orders are available now, with the release set for May 2020.

My thanks to the author and Head of Zeus Publishing for the opportunity to read this amazing book.