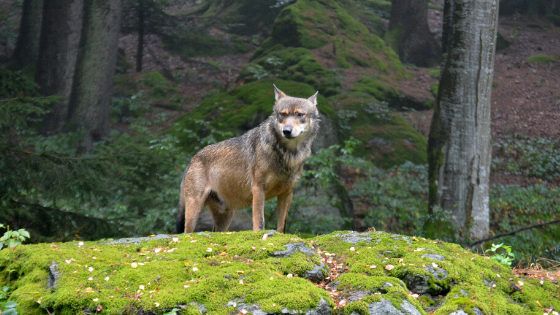 Mashtuk kept his eyes closed. It was enough to be awake. He could hear so much, and feel so much, that anything more seemed an impossible burden.

He lay as still as he could, feeling every fibre of the dried grass that had been laid under him, as if his pelt had been stripped off and the indentations of leaf and stem and grain were being imprinted onto his bare muscles. He suppressed a moan. He should be grateful that he did not have the barren rock floor of the den for his bed. After lying motionless on his side for so long he desperately wanted to shift his position, but held himself immobile with an effort of will. He wasn’t ready to let the pack know that he had regained his senses.

Truth to say, he wasn’t ready to face a pack that no longer contained his beloved Zélie. She had been killed in the vulpini attack that had left him so direly wounded. She was a whisper on the wind, and he was hanging to life by a mere scrabble of claws. He could feel, with every shallow breath, the emptiness of her passing, the gaping abyss in his mind where her voice had been for so many years. Despite his best efforts, a shudder passed over him, and he could sense others stirring, looking at him, speaking to him. There was Callan, his great friend of many years, and young Enis, his son. His and Zélie’s. The surge of his grief met the weight of their worry, the emotion pulsing against Mashtuk’s mind, clouding his thoughts and blurring their words. He wondered if his ears had been damaged too, or maybe his mindspeech knocked completely out of his head. This foggy pushing of words without meaning was excruciating, and he could no longer pretend even to himself that he was unaware of his surroundings. Mashtuk yielded to the ache of his body. He stretched his limbs, pushing through the pain of his injuries.

His movement prompted more noise, more activity, and more mindspeech clutching at him. None of it was more than a formless wave of sound, empty of meaning, foamy and insubstantial. Mashtuk opened his eyes. Why could he not hear them properly? Every other sense said that Callan and Enis were touching-close.

The big white canine was leaning over him, a quizzical look in his eyes, while young Enis had reached forward to cradle his father’s head in his hands. They were speaking to him, Mashtuk knew, but his mind could not separate the words they used. He let out a fretful whine, and Callan and Enis looked at each other. At last, thought Mashtuk, at last they know they can’t get through to me with mindspeech. They must know that I can’t hear them properly.

He struggled a little in Enis’s arms, managing to drag himself into a sitting position, even if he leaned heavily on his son’s strong body. The pain of his broken foreleg was less, he realised, if he rested the damaged paw on top of his other one. Callan and Enis continued speaking over him, around him, but nothing they said was clear to Mashtuk. He would have tried shaking his head clear, had it not felt so heavy and throbbed so much. He whined again, and his two supporters grew silent, their eyes meeting across him.

More canini entered the den, apparently alerted to Mashtuk’s awakening. They smelled of cold and mud. With them came humans. Mashtuk recognised their scent. These were tribesmen of the Storm, old friends of Callan, whose pack had run with them for almost two decades. They, too, tried to mindspeak to him, but their words were fuzzy, faint. He couldn’t hold them long enough to read them.

One of the women kneeled down next to him, and he realised that she was setting down two squirming infants. Within seconds, the two human babies had hitched themselves toward him, one flinging both arms around his neck, the other crawling close enough to take a gentle hold of his leg, just above the splint.

‘Papa! Papa!’ said the first twin in crisp mindspeech. It was Romulo, the one with the red birthmark over his lip and muzzle.

Mashtuk almost yelped in surprise, at last able to understand a mindspoken word. He leaned forward, licking the faces of both babies, his heart swelling again as he remembered how he and Zélie had saved the little humans from under the very gates of the Pale. So much love he and Zélie had given these two little ones, and now he felt it redoubled as they crooned comfort to him in perfect mindspeech, their little voices cutting through the haze in his thoughts, dragging him back to life.