Read a Sample of The Pale 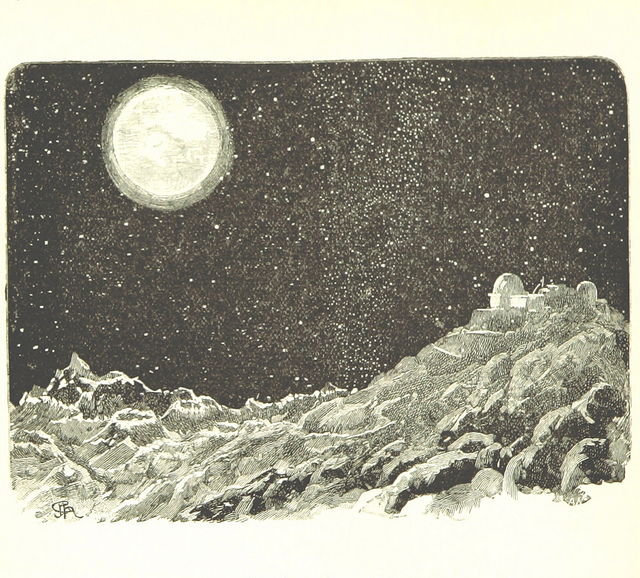 Here is the first scene of Chapter 1. Meet Tad, a rookie serviceman of the imposing Pale, as he reviews the factors that separate the Pale’s humachine citizens from those Outside.

[Image courtesy of British Library’s Flickr stream: p 322 of ‘The Conquest of the Moon: a story of the Bayouda’, 1889]

‘How does anything live out there?’ Tad murmured.

He was peering through the cutthroat panels of Alpha Gate, squinting a bit against the morning glare. It was early autumn, and dwindled wrecks of foliage lay strewn on the muddy plain. Shifting clouds refracted a hazy golden light onto the Pale’s stonemetal perimeter. The contrast between the gleaming city and its dirty surrounds was marked.

‘A just question. We citizens of the Pale have done well for ourselves,’ said Tad’s Squad Leader Jeris, standing on the observation step beside him. ‘Just look at the Outside. That’s what we’re safe from.’ Jeris shook her head. ‘Vile, dangerous, disgusting.’

Beyond the Pale’s colossal walls, Broad Plain stretched dank and ugly, its sullen red expanse streaked with thin, ground-hugging shadows of shallow dunes. Some leagues in the distance, a ruined mountain on the horizon provided a broken-edged bed for the chilly dawn. Like almost everything that he had seen for the first time that morning, the Outside was much bigger than Tad had imagined. He tilted his head to one side, his eyes narrowed as his personal dataset locked step with his preloaded information. He was aware of Jeris waiting, and once again felt grateful that he had been assigned such an experienced leader to introduce him to his duties.

‘How does anything live?’ echoed Jeris, expanding on his question. ‘The best they can, we suppose. Take the humans. Some of them live together in that settlement to the south, thinking that will keep them safe. Others wander around in big groups, tribes they’re called, hoping to move from one decent living space to another as the seasons turn. And some just scratch around Broad Plain as well as they might. Which is not well at all.’

Tad nodded. ‘And there are others Outside too–canini, and mastodons, and ursini, and–’

Jeris held up a hand. ‘I know!’ she said with a smile. ‘They don’t bother us much, though. Mostly they get killed by ferals.’

Tad frowned. ‘Ferals, they sound horrible. You ever seen one, Jeris?’

‘A few. Ugly critters. Just big gory appetites on legs–or wheels–or treads, depending which type. Always hungry and always vicious. That’s one of our tasks, you know, cleaning up after feral kills around the perimeter.’

‘Yes, ma’am,’ said Tad. He had never yet been Outside. The cleansing patrol was one of the few activities that took any of the citizens of the policosmos beyond their massive walls. He stepped down from the vantage point and followed Jeris.

On the paved inner go-way behind them, other service personnel zoomed along, busy on their rounds of the perimeter. Buildings of stone and plasticite fronted the go-way, each separated from the next by a narrow strip of ordered crops–every square centimetre of the policosmos had its use. Divided into seven districts, the Pale was the largest surviving colony on the continent. The only one worth saving, according to the doctrines of the city’s forecasters. The bucolic Settlement to the south and the flimsy camps of the wandering tribesfolk out there on the Plain were but poor travesties of survival. Only the citizens of the Pale could be said to have made a successful transition to a post-Conflagration life, and even that had taken almost two centuries.

Tad appreciated the slow pace Jeris set on their first tour together. He needed to become familiar with the physical manifestation of his home, a place that, so far, he only knew from the detailed representation imprinted into his hardware. Like all trainees in every arm of the amenities, he had full access to all the data he needed to undertake his tasks. Also like every other novice, he had never set foot outside the trainee oikos until today, when his preparation was completed.

Jeris had partnered many new service personnel across the extended decades of her career, and she explained that she always took the first shift slowly. Jeris said that the knowledge of a thing and the experience of it were complementary, necessary, but different components of the working serviceman’s toolkit. Tad was intensely fascinated by the Outside. Jeris told him she understood that too. For now, it was time to move on. She was getting too old, she said, to be taking all day on a single circuit. She rapped Tad’s shoulder.

‘Let’s go, Serviceman.’ Around the next corner, the go-way narrowed to pass through a shadowy arch. Overhead, the vast bulk of the Regent’s Tower straddled the path and the massive wall as well, forming a colossal bulwark that jutted into the Outside. Jeris halted under the arch, looked left and right, and then motioned Tad closer.

‘Know where we are now?’

Jeris nodded, settling herself onto a stone bench in the shade of the arch. She rubbed at a spot on her heel. ‘These wheels, you know, they pinch your liveware after a few decades,’ she said. Then she looked up. ‘I bet you know all about the Regent’s Tower. Look at your data. Tell me.’

‘Ma’am.’ Tad tilted his head and accessed the information, his large grey eyes dilating to blackness. Jeris pulled him a little to one side to make more room as two passing sanitariat workers slowed long enough for her to run her scanner over them. Tad didn’t notice. In a few seconds he looked up again. ‘Ma’am. The Regent’s Tower is the highest eminence of the Acrocomplexa, the tallest building within the policosmos, built of integrated stonemetal and primary clay blocks with shieldglass inserts and embellishments of rare metals and gems. The Regent’s Throne Room is at the centre and her terrace at the apex of the Tower. The terrace provides a view of 360 degrees over the Outside.’

Tad blinked. ‘Ma’am. The Acrocomplexa is the most important building in the entire policosmos. Its floor plan is deliberately convoluted. This is a defensive feature dating from the First Days. At the centre of the Acrocomplexa is the oldest structure inside the Pale, the Navel. Inside the Navel the most precious artefacts of the whole policosmos are kept under the constant watch of the Wereguard.’

‘The Wereguard?’ Jeris suppressed a yawn.

‘Otherwise known as the Immortal Guard, ma’am. Twelve specialized service personnel dating from the First Days whose sole task is protection of the Regent, the Regent’s family, and the Navel. The Wereguard have very little liveware but eternal premium hardware. The Wereguard were created at the same time as the policosmos itself and will endure as long.’

Jeris nodded, slapping Tad’s back collegially as she stood up. Her right hip made a loud click, the old cogs interlocking with reluctance. ‘Good work,’ she said. ‘And I have no doubt that you could go on to tell me about the construction of the Acrocomplexa in the First Years after the Great Conflagration, and the Regent’s family, and our role, and so on and so on. You could tell me all that and more.’

‘Yes, ma’am!’ said Tad eagerly, but Jeris held up a hand to forestall him.

‘I thought so. No need.’ She stepped through the tunnel formed by the Tower’s position over the walkway and onto the further go-way. This time, she clasped her hands in the small of her back and inclined her head to Tad. ‘But can you tell me, Serviceman Tad, where the citizens live?’

‘Yes ma’am.’ Tad felt on firmer ground. He and his fellow trainees had been given a great deal of information about the Pale’s ordinary citizens. ‘There are three residential oikoi inside the Pale, where our citizens live. These are grouped in the Capitoline district at the centre of the policosmos, guarded by the inner walls. And there are six industrial multiplexi, where the citizens labor. One of these is located at each prime point of the policosmos.’

‘Good. The citizens require most service work. What can you tell me about us? Servicemen?’

‘Ma’am. We work anywhere in the policosmos, wherever we are needed, and respond to all requests. Our primary role is guarding the perimeter, but we can undertake any task for any citizen, and it is our honour to assist all other arms of the amenities.’

‘Indeed. We’ll reach the amenities complex at the end of the shift and seek out your new digs. By the way, it’s your turn to scan now.’

‘Ma’am!’ Tad angled his palm towards a recycler who had just passed them. No alerts. He scooted up beside Jeris again. ‘Yes ma’am. All clear.’

‘Good. Walk with me now. You’re going to scan every citizen we meet, and tell me about every building we pass.’

‘Ma’am.’ Tad frowned. Her request made him think that perhaps Jeris didn’t consider him sufficiently prepared. At that moment, she turned and smiled at him, the silver plates of her cheekbones reflecting the rays of the morning sun.

‘By the way, congratulations. Most other new personnel have trouble standing the first time they perform a scan right after a data search. Too much information, through too many channels, you see. You’ve done well, youngster. We’re going to get on just fine.’

Tad grinned his relief. He thought so too.