The Naseby Horses by Dominic Brownlow 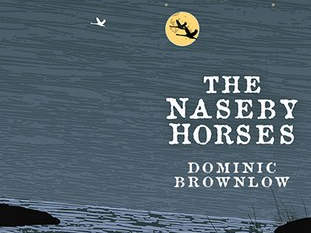 Simon’s twin sister Charlotte is missing in mysterious circumstances, and Simon’s world is shifting all around him.
In this beautifully written book, a family faces the nightmare circumstance of a lost child while they maintain certain secrets. Told entirely from the view of seventeen-year-old Simon, who is epileptic, the story unfolds, quite suitably, in fits and starts. There are moments of startling clarity and other times of dense, treacly confusion in which we doubt what we are reading.
Simon shares a deep connection with his twin, one which compromises his interactions with the rest of his family and with the police who are searching for Charlotte. He’s a complex character, and Brownlow has done a marvellous job of making him more likeable and comprehensible for the reader while he remains difficult and inscrutable to the adults in the story. A perfect representation of a bookish seventeen.

The Naseby Horses by Dominic Brownlow

Simon is an unusual character, with a deep knowledge of birds in particular and nature in general. Some of his habits (such as reciting encyclopedic sentences about Bewick’s Swans whenever he feels stressed) move him out onto the genius-eccentric spectrum. His extraordinary vocabulary and skills of exposition mark him as special. Without Charlotte between him and the more practical world, he is adrift.

Simon is at once completely credible and an unreliable narrator. There is genuine skill in the way Charlotte is revealed to us as much more unhappy and fragile than Simon understands, as more her own person than he believes. The plot becomes secondary to the investigation of Simon’s interior narrative, with all of the action rendered through his perspective. Is the curse real? Is the village pitted against the family, newcomers to the area despite their older connections? The paranormal invades Simon’s awareness and keeps us guessing until the final, very satisfying denouement.
The prose in this book is remarkable and beautiful and a complete pleasure to read.
A couple of my favourite quotes:
‘…in a sudden rush of activity, as though the earth has simply been turned upside down, thousands of starlings fall into the sky…’
‘Each day the tender sky will sharpen and fade. Each month the fields will change their shape and colour. Each year the winds will sag and fight…’
But every page delivers similar brilliance.
This is book I will return to for the delight of its prose and for the evocative descriptions of the mysterious landscape of the Fens. I am reminded of Australian poet and author David Malouf’s beautiful and wistful Fly Away Peter and Ian McEwen’s poignant, compassionate masterpiece On Chesil Beach.
For readers who like beautiful prose, complex characters and thoughtful plotting.