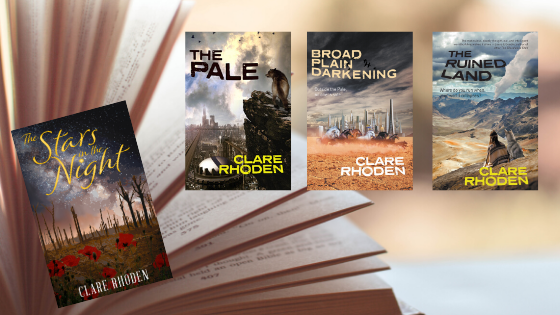 Order your copies of all Clare’s books here. Every book comes with the author’s signature and is despatched via Australia Post.

All Clare’s books are suitable for readers 15+.

If you wish to order a signed copy for elsewhere in the world, please contact us to ask about details of postage costs. Alternative online store links are available here.

The Stars in the Night including postage (Australia only)

A moving tale of the Great War: Harry Fletcher is sure he will marry Nora, despite their families. He’ll always protect Eddie, the boy his father saved from a Port Adelaide gutter. Only the War to End All Wars might wreck Harry’s plans. From Semaphore beach to Gallipoli, this is a story of love, brotherhood, and resilience.

The Pale (Chronicles of the Pale #1) including postage (Australia only)

In the second adventure, the safe world of the Pale is under threat. Inside the policosmos, the new Regent Adaeze strives for dominance over the all-powerful Senior Forecaster, but the Pale’s humachine citizens are unaware that their city is close to collapse. Outside on Broad Plain, the exiled human Hector undertakes a dangerous trek to find a safe haven for the orphaned twins. How can anyone survive as their world shifts underneath them? The thrilling second episode of the Chronicles of the Pale

In this gripping conclusion to the Chronicles of the Pale, the citizens of the mighty Pale have as much to lose as the communities of the Outside: Exiled from the Pale, humachine Hector has found a home with the tribes Outside. Or has he? While the canini struggle to care for the human twins, Feather travels Broad Plain to reunite them with their father. But his own family is scattered as the Pale sends out its terrifying army and the land itself buckles beneath them. Can anyone survive the ruination of the land?

A stunning dystopian world with heart, soul, and hope. For readers 15+: “Progressing through the series, I was in awe of the author’s ability to handle grief and intense drama, yet bring hope, faith, loyalty and kindness into such abysmal chaos … I totally loved Chronicles of The Pale and will be raving about them … If this is where we are headed, we need to be afraid. Should I have to face it, I would only do it, if I could, with a dog by my side as my equal, and on the lookout for friends.” DoubleStacked Shelves Book Reviews