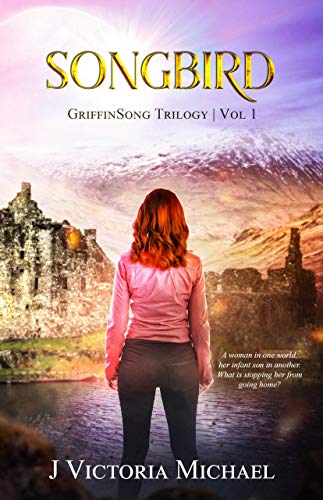 She lacked for nothing, except the favour note that could buy her a passage home.
In pre-Christmas rush Melbourne, in the midst of a panic attack, Irenya falls through a glass panel into another realm. Treated with suspicion by the inhabitants of Dar Orien, Irenya’s only wish is to find her way back to her toddler son Mikey and her partner.
What stops her from returning? Why are people afraid of her? How can she ever get back?
Dar Orien is a fantasy world complete with medieval-style clothing, weapons and values. Its magic system was recently disrupted by a vicious invasion that destroyed an important castle of the ruling archprince Elaaron, killing hundreds including Elaaron’s wife and one of his children.
Could Irenya be involved in the attacks on Dar Orien?
She was terrified of reaching their destination, and afraid she wouldn’t get there.
The juxtaposition of the everyday world with another, with characters moving between them, is an effective storytelling technique that allows the reader to reflect on that intriguing question: what if?
Sometimes, as in for example the Outlander series, the two worlds are separated by time, although they are part of a continuous historical world. In other stories, the slips between worlds occur through the veil of magic (the Deverry Daggerspell series is a good example), by space travel (Dr Who), or as alternate realities separated by momentary choices (like Sliding Doors).
She could not remember when misery gave way to oblivion.
In Songbird, the alternative universe is delightfully complex, characters have multiple motivations, and Irenya has to deal with her apparent Gift and the distrust of those around her. Her developing relationship with Elaaron is one to watch.
Songbird is intelligent fantasy for grown ups – don’t look here for sad and tired shortcuts like gratuitous violence, sex or foul language. This book captures and engages you with strong characters and a fascinating plot. I’m waiting eagerly for the next instalment.
A promising start to a fab new series for readers of thoughtful fantasy and paranormal adventures.